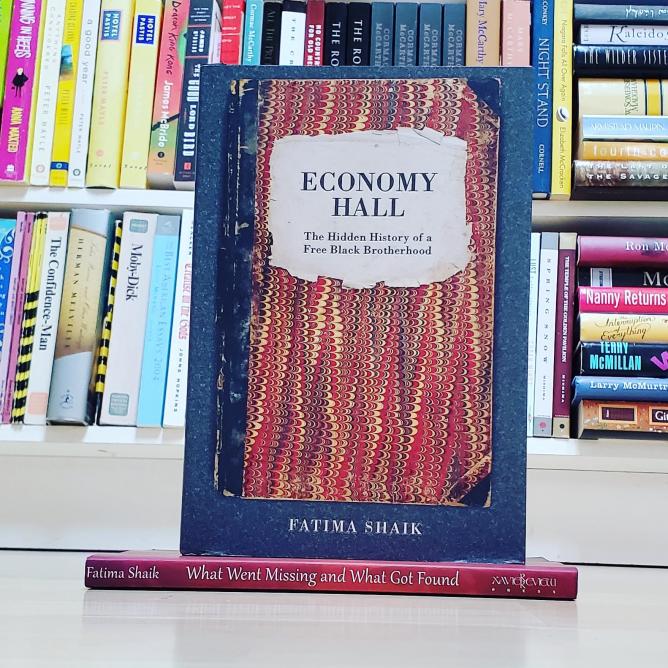 The Louisiana Center for the Book in the State Library of Louisiana has proudly announced that author and Louisiana native Fatima Shaik has been selected as the recipient of the 22nd annual Louisiana Writer Award. The prestigious award recognizes outstanding contributions to Louisiana's literary and intellectual life exemplified by a contemporary writer's body of work.

Shaik’s books include her recent narrative nonfiction Economy Hall: The Hidden History of a Free Black Brotherhood, a meticulously researched work on a largely forgotten aspect of Louisiana history, described as “lyrical and mysterious and always captivating” by The New York Times.

Shaik’s other work includes the short story collections The Mayor of New Orleans: Just Talking Jazz and What Went Missing and What Got Found; two children’s picture books, The Jazz of Our Street and On Mardi Gras Day; and the young adult novel Melitte, all set in Louisiana, as well as numerous articles and essays.

“We are fortunate to have such rich literary talent in our state,” said Lieutenant Governor Billy Nungesser. "I am proud that through this recognition, more readers will be introduced to Fatima Shaik’s impressive body of work and her numerous fans will applaud her being selected."

“With all of her books set in Louisiana and spanning many literary genres, Fatima's writing is an incredibly important contribution to Louisiana’s ongoing literary heritage. In her most recent work, she gives a voice to those whose voices would have been lost to history without her careful and dedicated research,” said State Librarian Rebecca Hamilton. “She joins a distinguished and varied array of past Louisiana Writer Award recipients from Ernest Gaines, the first honoree, through last year’s recipient, John Barry. It is an honor to present this award to such a truly outstanding writer.”

Shaik’s work has appeared in The Southern Review, Callaloo, Literary Hub, The Root, In These Times, and The New York Times and the anthologies N. O. Lit: 200 Years of Louisiana Literature and Breaking Ice: An Anthology of Contemporary African American Fiction, among others. She has received awards from the NEH, LEH, the Kittredge Fund, and the Platforms Fund. Founder of the Communication Department at Saint Peter’s University, Shaik is a member of The Writers Room NYC and a trustee of PEN America.

Learning of her selection, Shaik responded, “I am honored to be recognized by my state. Louisiana is dear to my heart, and its cultural history is central to my work. Anyone who knows me knows that Louisiana is ‘home.’"

By Fatima Shaik, The Historic New Orleans Collection (Prepared by)
$34.95

It is impossible to imagine New Orleans, and by extension American history, without the vibrant and singular Creole culture. In the face of an oppressive white society, members of the Soci t d'Economie et d'Assistance Mutuelle built a community and held it together through the era of slavery, the Civil War, Reconstruction, and Jim Crow terrorism.

What Went Missing and What Got Found (Paperback)

A love letter to the entertaining, unpredictable and flawed characters who populated New Orleans before Hurricane Katrina, this collection of magical short stories describes the inner lives of outsiders with humor and tenderness. Set in a deep-rooted community, the book is lyrical with undertones of the blues.