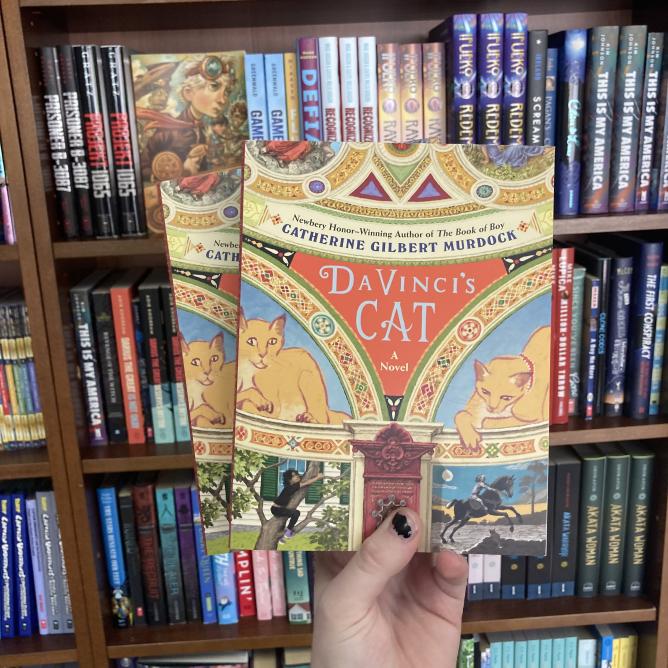 In a starred review, Kirkus Reviews calls Da Vinci’s Cat “thoroughly charming.” This Indie Next Pick will engross fans of When You Reach Me and A Wrinkle in Time.

Federico doesn’t mind being a political hostage of the Pope, especially now that he has a cat as a friend. But he must admit that a kitten walking into a wardrobe and returning fully grown a moment later is quite odd. Even stranger is the man named Herbert, apparently an art collector from the future, who emerges from the wardrobe the next night. Herbert barters with Federico to get a sketch signed by the famous painter Raphael, but his plans take a dangerous turn when he hurries back to his era, desperate to save a dying girl.

Bee never wanted to move to New Jersey. When an elderly neighbor shows Bee a sketch that perfectly resembles her, Bee, freaked out, solidifies her resolve to keep to herself. But then she meets a cat and discovers a mysterious cabinet in her neighbor’s attic—a cabinet that leads her to Renaissance Rome. Bee, who has learned about Raphael and Michelangelo as historical characters, never expected she’d get to meet them and see them paint their masterpieces.

"A story about selflessness, friendship and the importance of seeking unity through difference."—Shelf Awareness (starred review)

When You Reach Me: (Newbery Medal Winner) (Paperback)

"Like A Wrinkle in Time (Miranda's favorite book), When You Reach Me far surpasses the usual whodunit or sci-fi adventure to become an incandescent exploration of 'life, death, and the beauty of it all.'" —The Washington Post

It was a dark and stormy night; Meg Murry, her small brother Charles Wallace, and her mother had come down to the kitchen for a midnight snack when they were upset by the arrival of a most disturbing stranger.