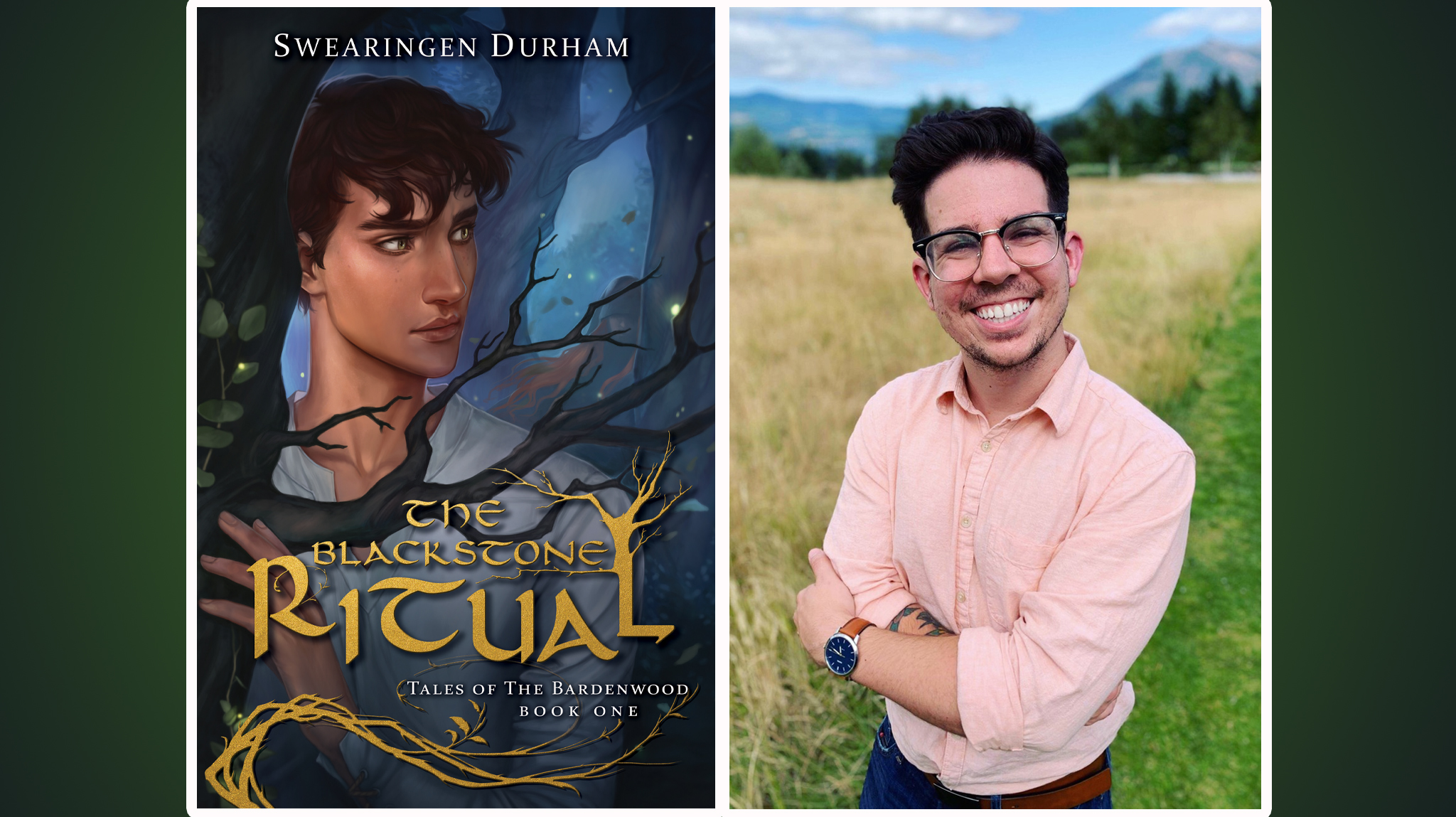 Book Launch! We are so excited to be hosting Swearingen Durham as he launches his debut fantasy novel, The Blackstone Ritual, into the world! Because we are still in the darkest timeline it is important to note that this in-person event will be a bit different than those we have had in the past. We all know it is fun to see the store packed full of enthusiastic readers for an hour or two, but on Saturday, September 5th we will have a full day with Swearingen so that we can ensure that everyone gets their chance to say hello and nerd out about the new book from a safe, social distance. Swearingen will be here from 10AM to 4PM so there is plenty of time for everyone to swing by. We can't wait to see you and to celebrate this epic release!

More about The Blackstone Ritual:

Throughout the kingdoms of Gylem, one rule stands above all others: Beware the Bardenwood

Stableboy and town menace, Arden Ford, probably wouldn't have lived to see his teenage years if not for his grandmother, the beloved village innkeeper. Though he was considered a pest to most, he could always count on her to get him out of trouble. That was until his seventeenth birthday.

Ard always doubted the tales of witches, ghouls, and hungry spirits that lurk within the piney shroud of the Bardenwood, but he never dared to step foot past its edge. Everything changes when he finds himself summoned into the forest by a strange girl and a trail of toadstools.

Deep in the forbidden Bardenwood, whose edge sits just beyond his home, Ard learns that a world of magic exists, but only by a thread. Magic is dying. Once it does, the balance of nature will tip and mankind will follow closely behind. What's worse, the kingdoms of Gylem face a threat from within that could upheave the entire realm if the disappearance of magic doesn't accomplish it first.

To save the Bardenwood and the kingdoms of Gylem, Ard must perform a ritual and free a magical king from imprisonment. A king that, if freed, can restore the balance of nature and bring magic back to the lifeless Bardenwood. The ritual, however, requires the use of blackstone... a rare gem widely regarded as myth.

As Ard sets out on a quest to find blackstone and free the mysterious king from imprisonment, he finds the superstitious tales of the Bardenwood he heard all his life were told to him for a reason-- a reason he may discover too late.

Some trails need never be trodden.

More about Swearingen Durham: From Lord of The Rings to Jurassic Park to X-men, Swearingen considers himself a fan first and author second. He believes the key to being a good storyteller is to adore stories. His love of characters and adventure found him writing his first works in grade school (even if those works were handwritten and bound with craft yarn). He loves music, animals, and just about anything that involves a stroll through the woods. An avid hiker and environmentalist, Swear often uses any time outdoors as inspiration for his writing. Though originally from Baton Rouge, Louisiana, he currently resides in Portland, OR with his wife and their three fur-children Merry, Pippin, and Weasley.