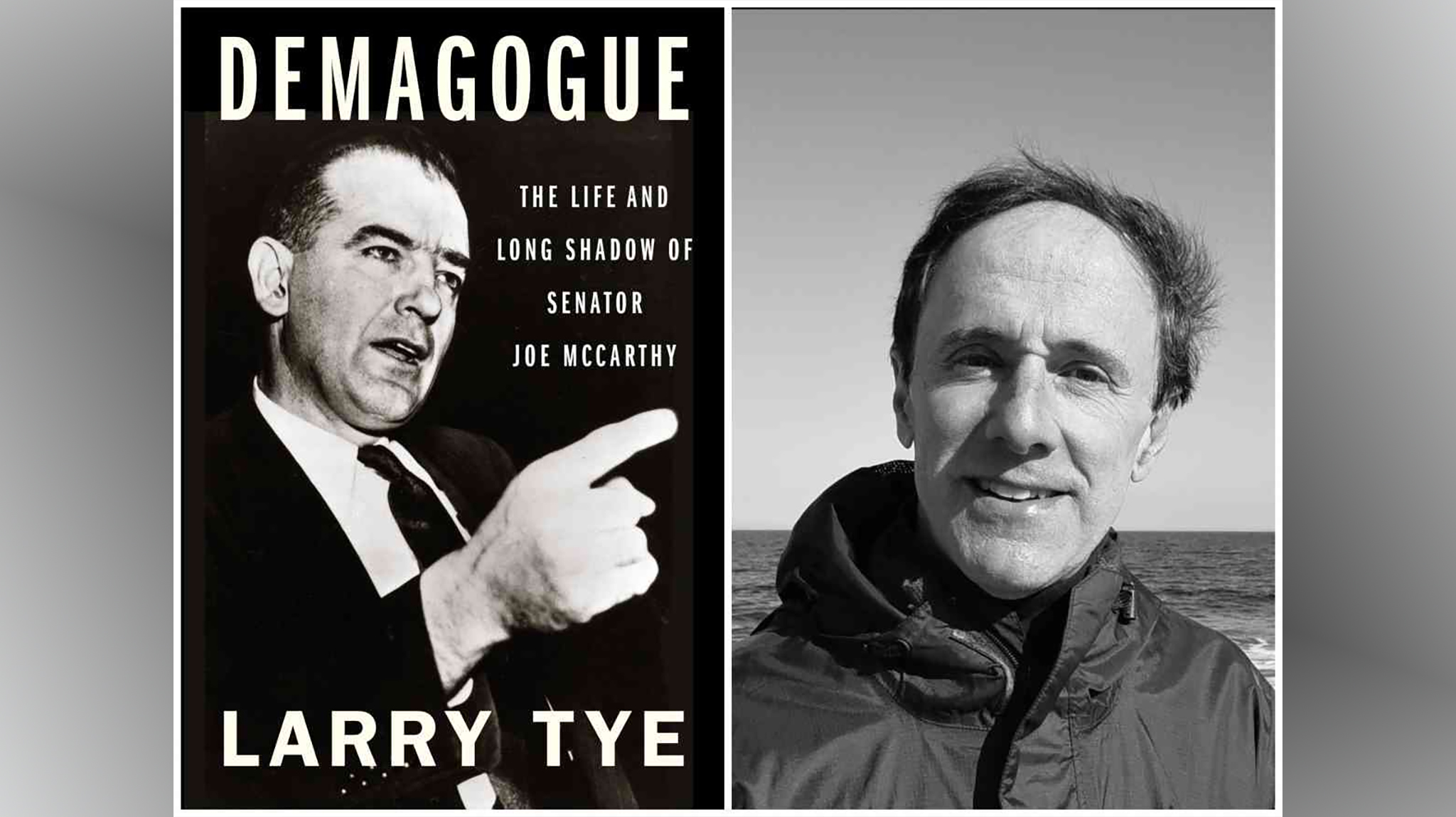 Cavalier House Books welcomes New York Times bestselling author Larry Tye, who will discuss his new book, Demagogue: The Life and Long Shadow of Senator Joe McCarthy, on Zoom and Facebook Live at 5pm CST on August 13. RSVP to recieve a link to join us on Zoom or simply navigate to our Facebook Page to participate and view the event.

The definitive biography of the most dangerous demagogue in American history, based on first-ever review of his personal and professional papers, medical and military records, and recently unsealed transcripts of his closed-door Congressional hearings

In the long history of American demagogues, from Huey Long to Donald Trump, never has one man caused so much damage in such a short time as Senator Joseph McCarthy. We still use “McCarthyism” to stand for outrageous charges of guilt by association, a weapon of polarizing slander. From 1950 to 1954, McCarthy destroyed many careers and even entire lives, whipping the nation into a frenzy of paranoia, accusation, loyalty oaths, and terror. When the public finally turned on him, he came crashing down, dying of alcoholism in 1957. Only now, through bestselling author Larry Tye’s exclusive look at the senator’s records, can the full story be told.

Demagogue is a masterful portrait of a human being capable of immense evil, yet beguiling charm. McCarthy was a tireless worker and a genuine war hero. His ambitions knew few limits. Neither did his socializing, his drinking, nor his gambling. When he finally made it to the Senate, he flailed around in search of an agenda and angered many with his sharp elbows and lack of integrity. Finally, after three years, he hit upon anti-communism. By recklessly charging treason against everyone from George Marshall to much of the State Department, he became the most influential and controversial man in America. His chaotic, meteoric rise is a gripping and terrifying object lesson for us all. Yet his equally sudden fall from fame offers reason for hope that, given the rope, most American demagogues eventually hang themselves.

“Larry Tye’s Demagogue nails the defining biography of Joe McCarthy. I grew up a Cold War kid watching it all on television. I thought I knew it all, but Tye makes it real. To understand Donald Trump, you have to understand Joe McCarthy first, and Tye’s your guide.” —John Kerry, former US Secretary of State

“Tye has written a fabulous, can't-put-down examination of one of the most dangerous politicians in American history. But Demagogue is more than a biography—it's a warning of the peril we are facing.” — William Cohen, former US Secretary of Defense

Larry Tye is the best-selling author of Bobby Kennedy and Satchel, as well as Superman, The Father of Spin, Home Lands, and Rising from the Rails, and co-author, with Kitty Dukakis, of Shock. Previously an award-winning reporter and national writer at the Boston Globe and a Nieman Fellow at Harvard University, he now runs the Boston-based Health Coverage Fellowship. He lives in Massachusetts.

The definitive biography of the most dangerous demagogue in American history, based on first-ever review of his personal and professional papers, medical and military records, and recently unsealed transcripts of his closed-door Congressional hearings

In the long history of American demagogues, from Huey Long to Donald Trump, never has one man caused so much damage i

Bobby Kennedy: The Making of a Liberal Icon (Paperback)

“A multilayered, inspiring portrait of RFK . . . [the] most in-depth look at an extraordinary figure whose transformational story shaped America.”—Joe Scarborough, The Washington Post

Superman: The High-Flying History of America's Most Enduring Hero (Paperback)

Seventy-five years after he came to life, Superman remains one of America’s most adored and enduring heroes. Now Larry Tye, the prize-winning journalist and New York Times bestselling author of Satchel, has written the first full-fledged history not just of the Man of Steel but of the creators, designers, owners, and performers who made him the icon he is today.

Satchel: The Life and Times of an American Legend (Paperback)

He is that rare American icon who has never been captured in a biography worthy of him. Now, at last, here is the superbly researched, spellbindingly told story of athlete, showman, philosopher, and boundary breaker Leroy “Satchel” Paige.

Rising from the Rails: Pullman Porters and the Making of the Black Middle Class (Paperback)

"A valuable window into a long-underreported dimension of African American history."—Newsday