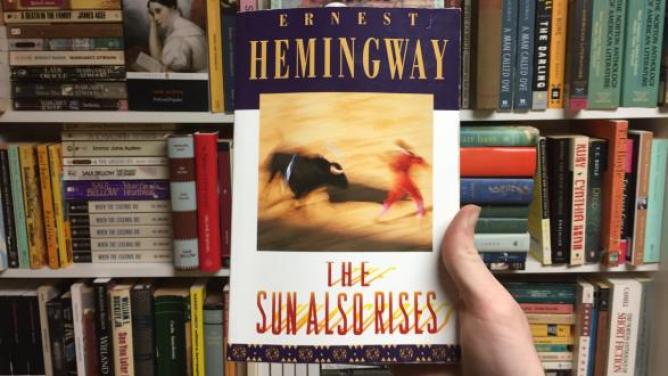 I first read The Sun Also Rises the summer leading up to my junior year of high school. At the time I thought it was great because I thought that Hemingway, both the man and idea, was great. Now I’m a little bit older and know less than I did then. I can still say with confidence that The Sun Also Rises is a great novel, a seminal novel. Without getting into a history lesson on modernist literature, just know that this book was revolutionary. No one had the casual authorial voice of Hemingway in the 1920s.

“But what of the story?” I hear you ask. Well at its core, The Sun Also Rises is about vacation, or it’s about escape. Jake Barnes is an American expatriate living in Paris following his service in World War I. Jake is a newspaper man, an hard worker, and a heavy drinker. He and his friends, including the wife of a duke, a former Princeton boxing champion, and the world’s most bankrupt millionaire, travel to Pamplona to watch the Fiesta de San Fermin. There are bull fights and fist fights, whiskey and wine.

The Sun Also Rises is one of those classics that still finds a place of reference for modern readers. I don’t think it is Hemingway’s best book, but it is his most essential.

Originally published in 1926, The Sun Also Rises is Ernest Hemingway’s first novel and a classic example of his spare but powerful writing style.​

A poignant look at the disillusionment and angst of the post-World War I generation, the novel introduces two of Hemingway’s most unforgettable characters: Jake Barnes and Lady Brett Ashley.

“Brimming, addictive . . . In Everybody Behaves Badly, the party has just begun and the taste of fame is still ripe . . . The Lost Generation [is] restored to reckless youth in living black and white.” — James Wolcott, Vanity Fair

The Letters of Ernest Hemingway, Volume 3: 1926-1929, featuring many previously unpublished letters, follows a rising star as he emerges from the literary Left Bank of Paris and moves into the American mainstream.