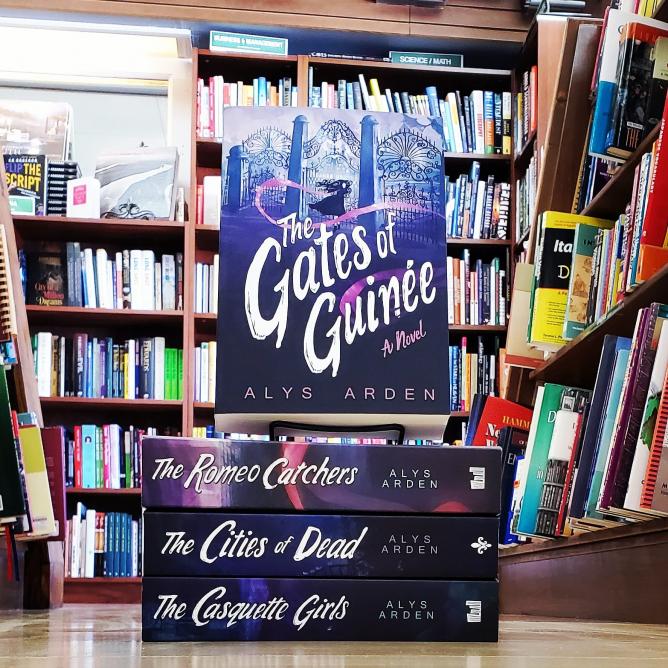 Hailed as "the Anne Rice of the text message generation," Alys Arden's sparkling debut, The Casquette Girls, entranced over a million readers online, and the series has since garnered a cult following around the world.

The fourth volume, The Gates of Guinée, picks up where the third book left off with Macalister LeMoyne held hostage by the Ghost Drinkers' coven and Adele willing to risk it all to save her father, even if it means opening a portal to the Voodoo Afterworld to hunt down the spirit of one of the greatest witches who ever lived.

A trip to the Afterworld might be the end of the supernatural world.

As the Ghost Drinkers seep into the crevices of the Crescent City, leeching the French Quarter of magic, the local witches are consumed with a new fight for survival. Adele has one chance to save everyone she loves, but it will mean breaking away from her coven and trusting a vampire.

For the first time in four hundred years, Niccol Medici feels on the precipice of finding his stolen grimoire. But in order to restore his family's legacy, he'll have to succumb to his darkest desires.New York transplant and first responder Isaac Thompson will stop at nothing to protect Adele, even if he has to give in to his Spektral magic to unearth the truth about Nicco's monstrous past.

For those who choose to pass through the Gates of Guinée, the rules of the Afterworld are simple:
Don't eat the food.
Tell no lies.

In a whirl of lucid dreams, fetish markets, and ancestral reunions, only those who bare their souls will survive this ghostly hunt, or else they'll join the land of the dead permanently.

Teetering on the razor's edge between everything she desires and utter madness, only her heart and her magic can lead Adele back home... if only Callisto Salazar hadn't stolen her Fire, and the most secretive one of them all hadn't stolen her heart.

The Gates of Guinée (Paperback)

Hailed as "the Anne Rice of the text message generation," Alys Arden's sparkling debut, The Casquette Girls, entranced over a million readers online, and the series has since garnered a cult following around the world.
"A Southern Gothic love letter." -Publishers Weekly, Starred Review, on The Casquette Girls

After the storm of the century rips apart New Orleans, sixteen-year-old Adele Le Moyne and her father are among the first to return. Adele wants nothing more than to resume her normal life, but with the silent city resembling a war zone, a parish-wide curfew, and mysterious new faces lurking in the abandoned French Quarter, normal needs a new definition.

Old World witches collide with the French Quarter's strangest denizens, setting off events that could tear the fabric of the Natural and Supernatural worlds, and only the most elusive, mischievous Voodoo lwa hold the key to stopping it.