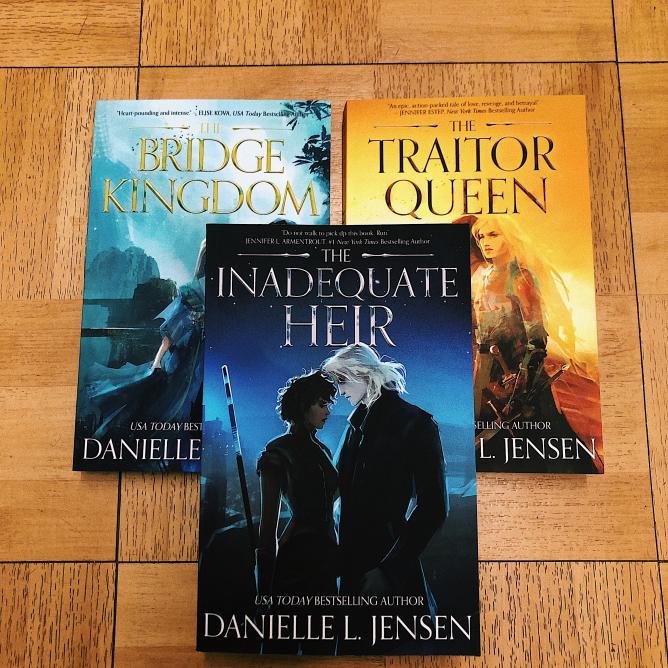 A soldier raised as heir to an empire, Zarrah is motivated by two truths. The first is that the Veliant family murdered her mother. The second is that her pursuit of vengeance will put every last one of them in their graves.

The Endless War between Maridrina and Valcotta has raged for generations, leaving thousands of Zarrah's people dead and countless more orphaned. So when she's given command of the contested city of Nerastis, Zarrah is prepared to do whatever it takes to destroy the Maridrinian forces who oppose her. And to kill the Veliant prince who leads them.

Yet a chance encounter with an anonymous, and handsome, Maridrinian causes Zarrah to question whether the violence she's perpetrated is justice or a crime. And as she continues to meet the nameless man each night, she finds common ground-and fiery passion-in his arms.But when identities are revealed, Zarrah must decide whether to embrace a chance at peace... or march to the drums of war.

Return to the world of The Bridge Kingdom in this sensuous fantasy full of romance and intrigue that is perfect for fans of From Blood and Ash and A Court of Silver Flames.

What if you fell in love with the one person you'd sworn to destroy?

Lara has only one thought for her husband on their wedding day: I will bring your kingdom to its knees. A princess trained from childhood to be a lethal spy, Lara knows that the Bridge Kingdom represents both legendary evil - and legendary promise. The only route through a storm-ravaged world, the Bridge Kingdom controls all trade and travel between lands, allowing its ruler to enrich himself and deprive his enemies, including Lara's homeland. So when she is sent as a bride under the guise of fulfilling a treaty of peace, Lara is prepared to do whatever it takes to fracture the defenses of the impenetrable Bridge Kingdom.

But as she infiltrates her new home - a lush paradise surrounded by tempest seas - and comes to know her new husband, Aren, Lara begins to question where the true evil resides. Around her, she sees a kingdom fighting for survival, and in Aren, a man fiercely protective of his people. As her mission drives her to deeper understanding of the fight to possess the bridge, Lara finds the simmering attraction between her and Aren impossible to ignore. Her goal nearly within reach, Lara will have to decide her own fate: Will she be the destroyer of a king or the savior of her people?

Lara has only one thought when her husband is taken prisoner: I will do whatever it takes to set you free.

A queen now in exile as a traitor, Lara has watched Ithicana be conquered by her own father, helpless to do anything to stop the destruction. But when she learns her husband, Aren, has been captured in battle, Lara knows there is only one reason her father is keeping him alive: as bait for his traitorous daughter. And it is bait she fully intends to take.

Risking her life to the Tempest Seas, Lara returns to Ithicana with a plan not only to free its king, but for liberating the Bridge Kingdom from her father's clutches using his own weapons: the sisters whose lives she spared.

But as Lara and her companions formulate a plan to free Aren from her father's palace, they soon discover that while it is easy to get in, it will be quite another thing to get Aren, and themselves, back out. Not only is the palace inescapable, there are more players in the game than Lara ever realized, enemies and allies switching sides in the fight for crowns, kingdoms, and bridges. But her greatest adversary of all might be the very man she's trying to free - the husband she betrayed.

With everything she loves in jeopardy, Lara must decide who - and what - she is fighting for: her kingdom, her husband, or for herself.

"The next installment in the Bridge Kingdom series is not to be missed. Do not walk to pick up this book. Run." - Jennifer L. Armentrout, #1 New York Times bestselling author of From Blood and Ash

What if you fell in love with the one person you'd sworn to destroy?

Lara has only one thought when her husband is taken prisoner: I will do whatever it takes to set you free.